George Everett Donaldson, 82, of Cambridge Springs passed away at the Erie VA Medical Center on Thursday, August 22, 2019, after a period of declining health. George was born in Pittsburgh on July 8, 1937, the son of the late Thomas Donaldson and Anna Eleanor Fuller Donaldson. George entered the United States Army in 1954, served two tours of duty in Vietnam, and retired in 1974, as a drill sergeant. Then he worked at Edinboro 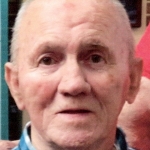 University, Lord Corporation, and as a deputy sheriff until his retirement in 1990. George was a member of the CMA Church of Cambridge Springs, the Masonic Lodge, the American Legion Post No. 381 in Cambridge Springs, and the Military Order of the Purple Heart, Erie Chapter where he served as an officer. He enjoyed spending time with his family and assisting other veterans in numerous ways.

He was preceded in death by son, Robert James Donaldson, on February 22, 2019; and brother, Thomas Donaldson.

He is survived by wife, Beatrice Donaldson whom he married on July 6, 1963; daughter, Barbara Ann Fetterman and her husband, Dennis of Punxsutawney, and their daughter, Adrionna Fetterman; daughter-in-law, Paula Donaldson of Butler, and her daughters: Kayla and Taylor Donaldson; sister, Dolores Albert of Greensburg; and nieces and nephews.

Friends may call at the Van Matre Funeral Home in Cambridge Springs on Saturday, August 24, from 11 a.m. to 1 p.m. A funeral service with military honors will be held at 1 p.m. officiated by the Reverend Jeff Kiel. Interment will be at Townley Cemetery.