Donald Francis Dowler, age 89 of Mill Village, passed away Thursday, August 22, 2019 at UPMC Hamot. He was born in Edinboro on March 4, 1930, the son of the late Clyde E. and Ruth I. (Isherwood) Dowler, and moved to Stone Quarry Road, LeBoeuf Township as a teenager. 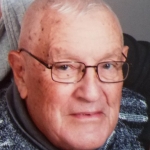 Don graduated from Edinboro High School in 1947 and attended Edinboro State Teachers College. He hauled milk for 29 years from the farm to the dairy, and later drove school bus for Fort LeBoeuf School District for 14 years, retiring in 1992.

Don was a lifetime member of the Mill Village Fire Company where he served as Chief for five years, and had the privilege of helping to design their first 4-wheel drive grass-fire truck. Don’s family was always first and foremost in his life and spending time with them was what he loved most. He also enjoyed dancing, bowling, and doing crossword puzzles.

Friends may call at the Van Matre Funeral Home in Waterford on Monday from 2-4 and 6-8 p.m. and attend a funeral there on Tuesday at 11:00 a.m. Burial will be at Mill Village Cemetery.

In lieu of flowers, donations may be made to the Mill Village Volunteer Fire Department.