Home/Waterford/Brown, Dora A.
­
Previous Next

Dora A. Brown, 88, of Erie, passed away Tuesday, April 21, 2020 at Pleasant Ridge Manor. She was born in Waterford Township on April 28, 1931, daughter of the late Osborne and Leora Lane Holder. 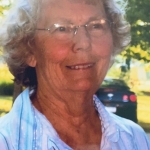 Dora enjoyed spending time at the Peninsula, at family gatherings, wallpapering and doing home improvement projects. She was a member of the Fairview Presbyterian Church and a devoted Deacon and choir member for many years.

In addition to her parents, she was preceded in death by her brother John Holder, her son-in-law Charles Palmer, and great-grandson Joseph Palmer.

Burial will be private and arrangements were made by the Van Matre Funeral Home of Waterford, Pa.