Thurman Barnett passed away Monday, May 18, 2020 at his home surrounded by his family.
He was born on July 19, 1940 in Prestonsburg, Kentucky to the late Mellis and Mollie Barnett. 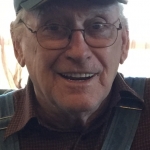 He was an electrician for 30 years before retiring in August 2000 from the IBEW Local 56. He enjoyed spending time with his family. In his spare time he enjoyed hunting, fishing, and being outdoors on his land in Waterford and Canadohta Lake.

He is preceded in death by his parents, his brother Johnny Barnett, and his sisters Cassie Rice and Katherine Kilgore.

Thurman’s family would like to extend a thank you to Denny and the other Hospice staff for their services.

Due to current restrictions, a private service will be held for the family at Van Matre Funeral Home in Waterford with the burial following at Valley Cemetery in McKean. A public gathering will be held at a later date.