Herbert M. Brown, 90, of Erie, passed away on Monday, June 1, 2020 at Saint Vincent Hospital. He was born in Fairview, PA, son of the late Paul and Susie Platz Brown. 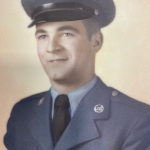 Herbert served in the United States Air Force during the Korean War. He enjoyed hunting, family gatherings, home improvement projects, and gardening. He was also a 50-year member of the Fairview Presbyterian Church where he served as a trustee for many years.

In addition to his parents, he was preceded in death by his beloved wife Dora Alice Brown; his sisters, Helen Shampine, Marian Jacobs, Edith McCray, Charlotte Rudler; and his brother Wilber, son-in-law Charles Palmer, and great-grandson Joseph Palmer.