Mary Ann Strange, 80, passed away at Lecom Nursing and Rehabilitation on Monday, August 17, 2020.? Mary Ann was born in Erie on November 8, 1939, the daughter of the late William Howard Vogel and Anna E. Klep Vogel. She graduated 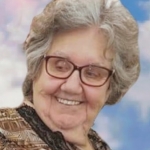 with the class of 1957, from East High School in Erie. On December 22, 1964, she married Lenville L. Strange, and he preceded her death on April 29, 2012. For over 45 years she was a caregiver of the elderly. She and her husband, Lenny, owned and operated the New Richmond Auction Barn for over 16 years. Mary Ann enjoyed attending flea markets and yard sales.

In addition to her husband, Lenny, she was preceded in death by son, William K. Kruszewski; son, Michael Kruszewski; and sister, Kathryn Dilimone.

A private service for the family will be held at LeBoeuf Cemetery.