Home/Waterford/Ethridge, David A.
­
Previous Next

David A. Ethridge, born on March 21, 1940 to Cecil and Gladys Eck Ethridge, died Tuesday, September 29, 2020 at UPMC Hamot. Having grown up in Mill Village, David graduated from Fort LeBoeuf High School, and then Edinboro State Teachers College with a Math Degree. He subsequently taught school in Lockport, NY and Union City, PA until 1972 when he and his father Cecil and brother Ted founded LeBoeuf Plant Food in Mill Village. He operated the business until 1993. 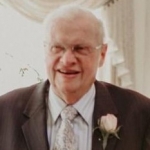 David’s life changed forever in 1979 when he married Jeanne Henne from Titusville, PA. In 1984, they adopted four children who survive: Susan Brak (husband Adrian) and their daughter Mia, Michael Ethridge and his two daughters- Emma and Carol, Libby Wischner (husband Carl) and their son Henry, and Jonathan Ethridge (wife Jessica) and their five children- Peyton, Alana, Tyler, Brayden, and Casey.

After selling the fertilizer business in 1993, Dave and Jeanne bought a dairy farm in Centerville, PA to provide meaningful work for their children. His remaining years were filled with building two homes, welcoming grandchildren, and traveling. He was an active member of Mount Pleasant Chapel in Union City for 29 years.

In addition to his wife, children and grandchildren, David is survived by a sister, Nancy Peters and her husband George, several nieces and nephews, and his beloved corgi, Jack.

In lieu of flowers, memorials may be made to Mount Pleasant Chapel.