Darren Scott Cook, age 51, of Waterford, passed away unexpectedly on Friday October 9th, 2020. He was born on June 29th, 1969, the beloved eldest son of William and Shirley (Page) Cook of Waterford.

Darren graduated from Calvary Baptist Christian School of Union City in 1987 before heading to the Culinary Institute of Pittsburgh. This is where he earned his associate degree in culinary arts, enabling 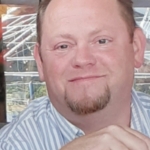 him to run his own restaurant at the Eagle Hotel in Waterford for a year. He then went on to earn his bachelor’s degree in English Education with a minor in Theater and Set Design from Edinboro University of Pennsylvania.  Darren continued his education at Seaton Hill where he earned his Master’s in Fine Arts in Writing Popular Fiction. He began his career in education teaching English at Erie First Christian Academy and then moved to the Perseus House Charter School of Excellence, Skills Center for the last 10 plus years. Darren shared his passion for food by leading the culinary program which he helped build. He also shared his talents by supporting the local arts, both college and high school levels, helping to create sets and build props for their plays.

He was preceded in death by his grandparents and his father-in-law.

Darren led an amazing and wonderful life caring for his family, teaching and cooking, mentoring his students and serving his community. As an organ donor, he continued his legacy of giving to others. He was beloved by his students, coworkers and community for his integrity, honesty and willingness to listen and give advice. He was always willing to lend a hand to all. Darren had a love for learning and is a self-published author, with his book entitled “Hala’s Rite”. This was one of his crowning achievements in his writing career. The other career achievement was the continued success of his many former students. Darren was a positive light for not only his family, but also his students.  While these are just a few highlights, we could go on for pages of all the amazing things Darren did for those around him. He put his family first and always.

A private service will be held for the family at Van Matre Funeral Home in Edinboro. The family invites you to come celebrate the life of Darren Cook at a wake honoring him, Wednesday, October 14th at 6pm at the Edinboro Firehall, 125 Meadville St #2507, Edinboro PA 16412.

In lieu of flowers, memorials may be made to the family for the Cook children’s educational expenses. An account is also being set up at Widget Financial in the Cook Family Name.

What a wonderful person who was taken way too soon. I worked with him at the Skills Center and he will be sadly missed.

We are so shocked to hear about Darren’s passing. Our deepest condolences to you and lots of lots of hugs. We have such fond memories of all the fun with the FLB Marching Band and our little band of volunteer parents. We so enjoyed all the time we spent together (and all the cold and rain too!). We truly hope you find peace, love and joy in the coming days and strength and courage.

I want to thank Darren fort all his help with Grandpa Bob Page. He was quiet so I really never got to know him well. Rest in peace with the Lord Darren.

Kim, my deepest sympathies to you and your family during this most difficult time. I am heartbroken for you over the news of Darren’s passing. You are all in my thoughts and prayers. Please reach out if you need anything.

May he RIP , he was an amazing human and an even better teacher. 💔

We are so very sorry for your loss. Darren was a happy and caring human being. Love and big hugs to the entire family.

My deepest sympathies. A leader and friend who has gone too soon. Goodbye my brother.

Thank you so much for the advice and guidance to our son James. we know heaven has a special place just for you all our love and prayers.James and Renee Lehr

Dear Kim and kids,
I am so sorry to hear of Darren’s passing. You are all in my thoughts. Deepest sympathies.
Trice from Heritage