Sebastian ?Ben? Samuel Ambrogio, 69, of Cambridge Springs passed away at his residence on Saturday, October 10, 2020. Ben was born in Pittsburgh on December 4, 1950, the son of Sebastian S. Ambrogio and Margaret Yolanda Coniglio Ambrogio. He graduated from Fairview High School in 1968, and for over twenty-five years had worked for various steel mills and foundries. On May 30, 1987, he married Evelyn Marie Biancosino. He had been a counselor at Hermitage House Youth Services and currently was a driver for Bethesda Lutheran Services. Ben was an avid deer hunter. 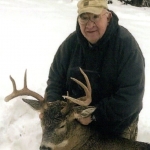 ????He was preceded in death by his father and grandson, Jacob Kulon.