Home/Waterford/Gray, Lawrence I.
­
Previous Next

Lawrence I. Gray, age 70, passed unexpectedly at his residence in Summit Township on Wednesday, October 28, 2020 from complications of ALS and mild dementia. He was preceded in death by his parents, Orlo and Madeline Short Gray, a brother, Howard Gray, and two sisters, Alice Ferra and Charlene Hunt, also his best friend. 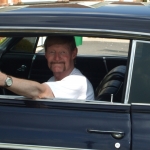 Family survivors include the love of his life for 45 years, his wife Nancy Johnson Gray; his sons Jesse and Brian (Jessica), of whom he was very proud and loved with his whole heart; his favorite grandchildren, Amber Gray Davis and her husband Cole; a brother Donald (Elsie) Gray; several nieces and nephews; and his cats, Samantha, Sierra, and Misty.

Larry worked at MFG in Union City prior to his ALS diagnosis in 2009. He was a past attender of Fairview United Methodist Church, a NASCAR and dirt track fan, and his hobbies included repairing cars, deer hunting, and fishing.

Friends may call at Van Matre Funeral Home in Waterford on Sunday from 2-4 and 6-8 p.m. The funeral service will be there Monday morning at 11:00 a.m. with burial following at Waterford Cemetery.