Darrel Jay Troyer, 74, passed away on October 9, 2020 at Forestview Skilled Nursing Home. He lost his courageous battle with Parkinson?s Disease after 23 years. He was born in Geneva, Nebraska, on August 17, 1946, to Roy and Mattie Erb Troyer, and moved with his family to Pennsylvania in 1955. He was raised in Spartansburg, PA. 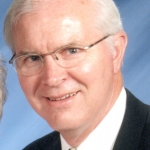 Darrel graduated from Sparta Merged High School in 1964. He went to work for Corry Jamestown before completing his two years in 1W service in Elkhart, Indiana. He returned in March of 1968. He then began his life long career at Troyer Farms Potato Chip company in Waterford. He began doing route work when the company had only 3 routes and was promoted to Sales Supervisor after 3 years. He then became Vice-President of Sales and Marketing. He dearly loved this job and continued on to grow and develop the sales force for over 40 years.

In June of 1968, he married his high school sweetheart, Patricia Cook Troyer. They were married for over 52 years. She was his best friend and constant caregiver for many years.

Darrel will always be remembered as a wonderful person, husband, father, sibling and boss who could always be trusted and willing to listen to everyone who had problems. He was a really good person who was respected and liked by all who met him.

He was preceded in death by his father and mother.

Darrel lived as full a life as possible, despite his Parkinson?s. His family always there for him.
The Troyer family would like to extend their heartfelt hanks to the Forestview Skilled Nursing Home that took care of him in his final days. The nurses and aides were wonderful.

Friends may call at Van Matre Funeral Home in Waterford on Tuesday from 4-7 p.m. The funeral service will be held at Valley View Mennonite Church in Spartansburg on Wednesday morning at 11:00 a.m. Pastor Robb Esh will officiate. Burial will follow at Rose Hill Cemetery.