Rodney H. Fish, age 79 of Waterford, died at his home surrounded by his family Thursday, November 5th, 2020 following a brief illness. Born July 31, 1941 in Warren, PA, he was a son of the late Harry and Leona Howard Fish. Rod married the love of his life, Linda M. Monroe Fish, in 1966, and they together raised a son and a daughter. 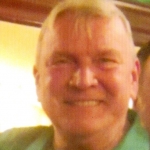 Rod was a U.S. Army veteran and a molder by trade. He worked for over 30 years at Erie Bronze and Aluminum, where he retired in 2006, and he worked a short time at Erie Malleable. He enjoyed bowling, golf, and playing cards and dominoes with friends. Rod was especially happy hunting, fishing, and camping at Evergreen Lake Park in Conneaut, OH where he and Linda spent time with their many friends over the past 50 years. He was a member of the American Legion Post #285 in Waterford.

In addition to his wife Linda, Rod is survived by a son – Rodney Troy Fish and his wife Pam of Union City; a daughter – Shelly M. Fish of Erie; 4 grandchildren – Justin Fish, Nikkia Fish, Kayla Hazen, and Anthony Hazen; 4 great-grandchildren; a sister-in-law, Eleanor Fish of Waterford; and his in-laws, Tom and Marianne Monroe, Michael Monroe, Nancy Mongera, Rodney and Heidi Monroe, and Barbara and Kevin Cromwell.

He was preceded in death by his parents, brothers Robert, Al, and Jack Fish; sisters Kay Hoag, Yvonne Babcock, Carlene Dolan, and Evelyn Ann Fish; and his nephew Alvin Fish.

Friends and family may call during public visiting hours at Van Matre Funeral Home of Waterford on Tuesday from 4-7 p.m. A private funeral service will follow. Interment will be in Waterford Cemetery.