On Wednesday, November 18th, 2020, Robert (Bob) Dale Morris of Washington Township died peacefully at the age of 92 at Elmwood Gardens of Erie. Robert was born in Ebensburg, PA on September 8, 1928 to Robert P. Morris and Ocea (Stiles). On October 8th, 1955 he married Marjorie Naomi Bell of Kansas City, MO and was married for 46 years until her death on August 22, 2001. 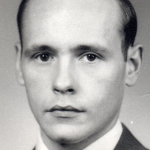 Robert served in the military at the Chanute Air Force Base in Illinois and was a Korean War veteran stationed in Guam. One of Robert’s many passions in life was aviation. He was a member of the Brokenstraw Airport and flew small craft airplanes into his 80?s. Farming with conventional machinery and with draft horses is included in Bob?s other passions. Bob owned several teams of Belgian draft horses which he playfully used for farming activities. He was often seen attending many plow days and horse pulls in the tri-state area. He would photograph teams of horses and various activities capturing many magical moments for farmers and their beautiful animals. Bob was a steam and gas engine buff and a member of the Pioneer Steam and Gas Engine Society of Northwestern PA. Along with photography, Bob also enjoyed welding and the craft of working with metal.

Bob worked for telephone companies ATT and GTE, retiring from GTE in 1993.

Bob was a member of the Washington Valley Christian Church and will be honored in a private burial at Mitchell Cemetery.