Elizabeth Jean Gibson was born October 13, 1924, in the Wesleyan Methodist Church parsonage in Sandy Lake, Mercer County, Pa., to the Rev. Lee Emmett Gibson and Ida Mae Barnes Gibson. She was the fifth of five children and remained close to her siblings and their families throughout their lifetimes. 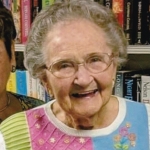 She lived for decades in Erie and Venango counties in Pennsylvania before living for 35 years in Youngstown and Girard, Ohio. She had been a resident of Wesbury since February 2018.

As the daughter of a minster, she and the family moved frequently throughout her childhood, mostly around Erie County but also for a time in Scranton, Pa. She spent the first three years of her education in one-room schoolhouses and graduated from North East (Pa.) High School in 1941 at the age of 16, having skipped two grades during her many school transfers. She had been awarded a four-year high school scholarship to the private Villa Maria Academy in Erie but turned it down because the family couldn?t afford the related expenses.

The family suffered ?some very lean Christmases? during the Great Depression, she said, ?but I don?t remember being sad about it. We always had lots of music.?

Family members enjoyed her stories about learning to drive in her brother Forrest Gibson?s Model A Ford and her first full-time job working for him and his wife Gladys at their Greyhound Bus station and Western Union office. She particularly enjoyed using the bus schedules to help people get across the country by figuring out what stops and transfers they would need to make.

She married Gerald Ray Bemis, a third-generation dairy farmer in the Wales community of Erie County, on August 7, 1943, in Greenfield Baptist Church in North East. The ceremony was performed by her father. She said she began dating Gerald because of their mutual love of roller skating and baseball. Their first date was at a roller rink in Waterford, Pa.

Together they made a home and a living on the Rose Cliff Fruit Farm along Lake Road in Erie County, directly across the road from the farm of Gerald?s brother, Milton Bemis, and his family. The two couples were fast friends throughout their lifetimes, as they were with their other brothers and sisters, and their children and grandchildren still remain close with their cousins. She made and maintained many friendships throughout her life, but her immediate and extended families were the center of her world.

While farming, she also commuted into Erie during World War II to work at Continental Rubber. She was proud of the company?s award-winning record of wartime production. Later she worked in clerical and retail-sales jobs while volunteering extensively with her church, the Boy Scouts and Girl Scouts, and other organizations.

As a child, she said, she dreamed of ?growing up to be a great singer,? and she was active in music all of her life. In addition to singing in and accompanying church choirs for decades, as a young woman she sang duets with her friend Anna Dean Douglas on the radio in Erie, on a program led by noted Christian musician and composer Carl A. Blackmore. Even at the end of her life, while isolated because of Covid-19, she enjoyed singing with her children on telephone calls.

When her husband became too ill to farm, the family moved briefly to Oil City, Venango County, Pa., in 1952 and then in 1954 to Waterford, Erie County, Pa., where they raised four children. In 1964, they moved back to Oil City. In 1976, with all their children grown, they moved to Youngstown, Ohio, where Gerald was operations director of the local Goodwill Industries chapter and she was traffic manager for WFMJ-TV.

While living in Youngstown, they were very active square dancers with the Steel Valley Squares and other groups. They also enjoyed maintaining a large vegetable and flower garden and rooting for the Pittsburgh Pirates and Steelers, as well as for the Cleveland Indians.

When her husband died in 2009, she credited the 66-year longevity of their marriage to their mutual ?commitment to Jesus as Lord.?

She is survived by her children and their spouses, Sharon and Craig Mitchell of Waterford; Sumner and Georgene Bemis of Polk, Pa.; David and Casey Bemis of Santa Ynez, Calif; and Marilyn Bemis of Santa Cruz, Calif.

She was preceded in death by her husband; her parents; her brother Forrest ?Bud? Gibson of Houston, Texas; and sisters Angelina Millage of Cherry Valley, Calif.; Myrtle Shook of Clarks Mills, Pa.; and Charlotte Zaney of Bridgeville, Pa.

Interment was at Wales Cemetery in Erie County. A celebration of her life will be held at a later date.