William James Carroll, Sr. passed away of natural causes on Wednesday, December 30, 2020 at Sarah Reed Senior Living at 100 years of age. He was born on August 20, 1920 in Erie, PA, son of the late William and Ida Mae (Wells) Momeyer Carroll. 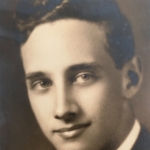 Bill graduated from East High School. He met the love of his life, Helen E. Smith, at Reed Manufacturing in Erie just before enlisting in the U.S. Army during WWII, serving as a 1st Lt. in the Signal Corps, stationed in the Philippines, Australia, Japan and New Guinea. Shortly before his deployment overseas, Bill asked Helen to “to take the long walk”. She boarded a train from Erie to San Antonio, TX to begin a marriage of 67 years until Helen’s passing in 2011. His fond nickname for Helen was “Mavers” – not even Bill could explain where that came from. Upon returning home from the war, Bill worked for the Erie Railroad followed by a long career in banking starting with Union Bank & Trust and retiring from Mellon Bank in 1986.

Bill was a longtime member of the Summit Lion’s Club and Summit United Methodist Church where he served both tirelessly on many committees through the years. He was also a volunteer reader for the Blind Center for many years. Our Dad was charmingly witty and the definition of a gentleman. To that Bill would say, “I resemble that remark” – just one of his many quips. 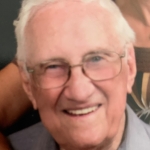 Besides his parents and wife, Helen, Bill was preceded in death by three brothers: Kenneth Momeyer (Marion), Gerald Momeyer (Ruth) and Caryl Momeyer, and one sister, Vera Momeyer Niemeyer.

The family would like to express a heartfelt thanks to the staff and administration of Sarah Reed Senior Living for their many years of care for our parents.

A memorial service will be held at a future and safer time. Private burial will be at Laurel Hill Cemetery.