George F. Peters, 91, passed away peacefully on December 22, 2020 in his home in Edinboro surrounded by his family.
George was born on October 14, 1929, the son of the late John and Miriam (Kelly) Peters. 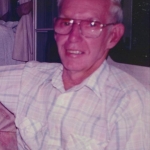 He graduated from Edinboro High School in 1947, and from Alliance College in Cambridge Springs in 1949. Along with his brother, Gordon Peters, George operated a dairy farm south of Mill Village for 68 years. He was also well known for raising and selling eggs throughout the city of Erie and Erie County through the mid 1980?s. George was also employed as a Field Assistant by the United States Department of Agriculture Farm Service Agency (formerly the Soil Conservation Service) from 1952 to 2018, assisting area farmers with government programs and doing field checks and surveys.

He was very active in many organizations to benefit his community and fellow farmers. He joined the Board of the Erie County Conservation District in January 1983, and served as Farm Director until he stepped down from the Board in 2014. He remained an Associate Director thereafter. He also served as Treasurer.

George was a lifetime member of the Mill Village Fire Department which he joined in March 1952, and was the longstanding treasurer for over fifty years. One of his proudest accomplishments was his work in assisting the department in securing funding and the construction of the new fire hall. He was also well known for being the guy selling tickets for the annual barbeque chicken dinner held by the firemen.

He was a 50+ year member of the Erie-Crawford Cooperative in Union City, and was a member of the Board of Directors and President.

George was preceded in death by his father, John C. Peters and his mother, Miriam (Kelly) Peters; his twin brother Gordon Peters, brother Clyde Peters; and his aunt Mary Whidett of Largo, FL.

In his later years, George enjoyed travelling with his family including trips to Florida, the Dakotas and Hawaii.

A private funeral service for the immediate family will be held at Van Matre Funeral Home in Waterford with burial following at Mill Village Cemetery.

In lieu of flowers, memorials can be made to the Mill Village Volunteer Fire Department, 14408 N Main St., Waterford, PA 16441.