Keith Lee Hamilton, age 84, of Centerville, passed away with his daughters by his side on Sunday evening, January 24, 2021 at Wesbury United Methodist Community in Meadville. He was born in Athens Township, Townville on February 9, 1936, the son of Edward J. Hamilton and Zada Marie Holland Hamilton. 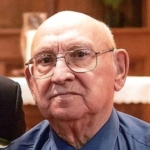 In his early years, Keith was a dairy farmer and worked construction with Associated Contractors. He later owned and operated for over 20 years a grocery store in Little Cooley, Keith & Jean’s Superette, with his former wife Jean Hamilton. He also drove school bus for Mark Tatolovic for 40 years.

Keith was a member of the Covenant Masonic Lodge #473 of Cambridge Springs, and he enjoyed spending time with his family, gambling, raising race horses, bowling, and the outdoors and hunting.

He was preceded in death by his former wife, Jean Hamilton, his son Brian Keith Hamilton, and a grandson Zachary Hamilton.

Friends are invited to call at Van Matre Funeral Home in Cambridge Springs on Wednesday from 2 – 4 pm. A private funeral service for the family will be officiated by Rev. Harry Zurasky of New Richmond Church. Burial will be in Kingsley Cemetery, Townville.