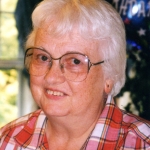 Born in New Bethlehem, PA on February 2, 1938, she was a daughter of the late Charles and Tillie Hepler White. Thelma attended Warren High School and Oberlin College in Ohio, and was privileged to study one year in Germany. She worked as a Quality Control Technician for over 25 years at Osram-Sylvania in Warren, PA.

She is remembered as a civic-minded woman who loved the German language, painting and drawing, and as a Scrabble enthusiast.
Thelma had three brothers who predecease her- Theodore White, Harry White, and Dean White. Her surviving family includes her sister, Evalyn Churchill, with whom she resided in Waterford, and several nieces, nephews, grand-nieces, and grand-nephews.

Memorial donations may be made to Stancliff Hose Company, PO Box 275, Waterford, PA 16441.