Janette Marie Metzler entered into God?s Kingdom on Sunday, February 14, 2021, following a battle of several years with breast cancer. Janette was born on May 19, 1945 in Viborg, SD to Carl and Marie Lund. When Janette was still a toddler, the family moved from Viborg to Yankton, SD. After graduating from Yankton High School in 1963, Janette went to college at Augustana College in Sioux Falls, SD, where she earned a Bachelor?s degree in Education. She later earned a Master?s degree from Edinboro University of Pennsylvania. She had a long career in teaching, mostly in the Erie, PA public school system. 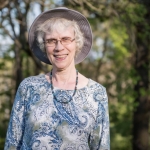 Janette?s Christian faith provided the foundation for everything else in her life. She was a cherished member of several area churches over the years, most recently at Federated Church in East Springfield, PA. She looked for opportunities to study and grow in her faith, which also led her to join a number of Bible study groups in the area. In later years Janette started attending an annual summer camp at Word of Life in the Adirondacks, which provided an opportunity for more in-depth studies, as well as a being a time of renewal and restoration for her. Janette was a prayer warrior and truly lived St. Paul?s teaching to ?Rejoice always, pray without ceasing and to give thanks in all circumstances.?

During her college years, Janette met her future husband, Norman Metzler, while working a summer job in Angola, IN. They were married on June 20, 1970, and eventually settled in Norman?s hometown of Waterford, PA. They built a life together there and raised their family, daughter Julia and sons, Norman and Joshua. Janette was devoted to her family. Most summers she returned with the children to visit with extended family in South Dakota, creating cherished memories for everyone.

Janette was blessed with eight grandchildren. Christopher, Nathaniel, and Isaac LeVan are the children of Julia and Steve LeVan. Norman, Caleb, Jaden, Mitchell and Hannah Metzler are the children of Norman and Shannon Metzler. Janette loved watching this next generation grow and begin to fulfill their purpose and promise.

Janette was a kind and caring person, who made lasting friendships in every stage of her life. She will be deeply missed by all those whose lives she made better in so many ways.

The burial will be private. The family plans to arrange a public memorial service later in the year.