Ron is survived by his very best friend and the woman with whom he shared his life, his beloved wife Katrina Andrasko “Tina”, his cherished dog Molly, his older brother Chuck Andrasko and Peg, and his younger sister Lisa Andrasko and Bud Hughes. Ron is also survived by his step-children Mark Day and his wife Janet, and Athena May, along with the 5 grandchildren he adored, Jada, Jazzy, Sassy, Pressy and Seany. 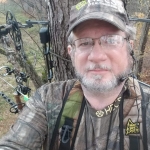 Ron is predeceased by his dear mother JoAnn Andrasko (Frank) and his father Charles Andrasko.

Senior Master Sergeant Ronald J. Andrasko was a retired Veteran of the United States Air Force and served for 26 dedicated years. Ron was an honored military man who received many awards and accolades during his military career for his virtuous and exemplary service. He was proud to serve his country.

After Ron retired, he and Tina traveled the country in their fifth-wheel RV for years. This was a dream for both and they grabbed at this adventurous opportunity while they were still young enough to do so, before finally settling in Erie, PA.

Ron was a selfless and earnest steward for the Lord. With his wife Tina, they ministered to and fed the homeless every single week for the past several years at a local shelter. Ron and Tina were compelled and driven by our Father above to bring as many as possible to the written Word of God, especially those that have fallen through the cracks.

Ron was happiest spending time with his family, cooking for and pampering his wife, laughing with and having heart-to-heart conversations with his sister Lisa, and being one with nature. Ron was an avid outdoorsman. He loved to hunt and fish and shared this love with his brother Chuck, his stepson Mark and his granddaughter Jazzy. Ron and Tina were also passionate fans of football and NASCAR racing. They never let a Sunday go by without watching the Steelers or a race. Ron especially enjoyed watching the late great Dale Earnhardt, Sr. and the now retired Rusty Wallace.

We are assured through our Savior that we will receive everlasting life. Ron believed this fiercely. He is enjoying his new celestial body, and we can only imagine that his new God-given name is the definition of commitment, benevolence and admiration. Ron lived a simple life and wanted to build his treasures in Heaven.

We are so much better for having known you Ron.

“When we all reach the end of our earthly journey, we will have only just begun” – Billy Graham

In lieu of flowers, contributions may be made to the Upper Room of Erie Homeless Shelter, 1024 Peach Street, Erie PA 16501.

Visiting hours and funeral service will be private at the Van Matre Funeral Home, 105 Walnut Street, Waterford, PA 16441, on Thursday, March 11th. Burial will be in Wattsburg Cemetery.