Susan Pearl Giknis, age 61, passed away unexpectedly of natural causes at her home in York, PA on Wednesday, November 25, 2015. Born on November 29, 1953 in Meaville, PA, Susan was a daughter of the late Paul William Brown and Carol Mae Hilgendorf Brown. She married John David Giknis on June 2, 1979 and he survives. 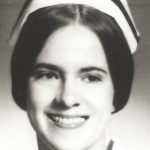 ??????Susan graduated from Cambridge Springs High School with the Class of 1971 and continued her education earning a degree in nursing from Indiana University of PA and later receiving her Master of Nursing degree from Edinboro University in 1981. She worked at Hamot UPMC and Saint Vincent Health Center in Erie for over 40 years as a cardiac care nurse.? In 2003, she enrolled in a traveling nursing program that led to positions in Baltimore and eventually at York Hospital from 2010 until the present.

Surviving Susan in addition to her husband, John David Giknis of Cambridge Springs, is a son – Michael John Giknis and his partner, Heather Lynn Elderkin of Erie; a daughter – Kimberly Ann Giknis of New York City;? two granddaughters – Sarah Ann Giknis and Emily Elizabeth Giknis; a grandson – Christopher Michael Giknis; two brothers – Paul William Brown, Jr. of Reno, NV and Alan Dale Brown of Louisville, KY; and a sister – Araminda Elizabeth Brown of Edinboro. Also surviving are six nieces – Mekenna and Hannah Brown, both of San Diego; Nicole and Caitlyn Brown, both of Crestwood, KY; and Erin and Linsey Sipple, both of Edinboro and several aunts and cousins. She was preceded in death by a sister -Carolyn Marie Guriel who died in February of 2002.

Friends may call at the Van Matre Family Funeral Home in Cambridge Springs on Monday, November 30th? from 6 until 8 p.m. and are invited to attend funeral services there on, Tuesday at 10:00 a.m. with Reverend Brian Riddle, pastor of St. Paul’s Evangelical Lutheran Church in Drakes Mills, officiating. Interment will follow at Saegertown Cemetery.