Samuel E. Gardner, of Waterford, died Wednesday, February 3, 2016, surrounded by his loving family, just four days short of his 73rd birthday. Born February 7, 1943 on Gardner Hill, Byrnedale, PA, he was the second youngest of 14 children of the late Clyde and Audrey Ives Gardner. 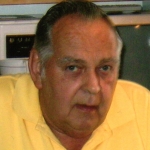 ?? Sam grew up and attended school in Elk County, PA before entering the U.S. Army in 1961. He served overseas and was honorably discharged in 1964. Sam married Alene Gorman on September 4, 1965 and together they started their family and lived in St. Marys, PA until moving to Waterford in 1973.

Sam worked as a machinist at General Electric for 25 years and was a member of UE Local 506. He was a dedicated family man who loved his wife, children, grandchildren, and great-granddaughter very much, and overall, enjoyed talking with anyone, sharing a smile and a joke, and, of course, his homemade peanut brittle.

For many years Sam enjoyed sports and played in local leagues on bowling teams, baseball teams as a left-handed pitcher, and in pool tournaments. He was a member of All Saints Parish and American Legion Post 285, both in Waterford, and he enjoyed hunting and going for coffee. Sam will be remembered for his optimistic attitude, even during illness.

Friends are invited to visiting hours at Van Matre Funeral Home, 105 Walnut Street, Waterford on Friday from 5:00 until 8:00 p.m. A Mass of Christian Burial officiated by Rev. Fr. Gregory Passauer will take place Saturday morning at 10:00 a.m. at All Saints Parish in Waterford. Interment will be in St. Marys Catholic Cemetery, St. Marys, PA.

Donations may be made to Stancliff Hose Company, PO Box 275, Waterford, PA 16441 in lieu of flowers.