Thaddeus “Ted” Haluch, age 90, passed away at his home, 329 Center Street, Cambridge Springs on Thursday, February 4, 2016 after a period of declining health. Born in Donora, PA on December 10, 1925, Ted was a son of the late Stanley Haluch and Julia Musial Haluch. He married the former Josephine Turek on February 18, 1950 and she survives. 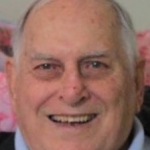 ???????Following his graduation from Donora High School in 1943, Ted joined the US Navy serving his country from 1944 until being honorably discharged in 1946. While in the Navy, he joined the See Bees and was stationed at various locations including the Aleutian Islands, Rhode Island, Great Lakes, and New York.

Ted entered Alliance College in 1946 and graduated in 1950 earning an English degree. He received his teacher’s certificate from Edinboro College in 1951. In 1954, Ted began a career with Alliance College in Cambridge Springs as Athletic Director and coach of the baseball and basketball teams. Ted led the Alliance Eagles to appearances at the NAIA district 18 tournament in 1962 – 1963 and again in 1964-1965.

Ted was an active member of Saint Anthony of Padua Catholic Church in Cambridge Springs where he sang in the church choir. He was a member of the Polish National Alliance and served as president of Local #1540 and ran the PNA golf tournament for over 35 years. Other pleasures Ted enjoyed included golfing, dancing, being a Pittsburgh Steelers fan, visiting with former Alliance College alumni and PNA golfers.

Preceding Ted in death was his son – Stanley Haluch who died in 2013; his son-in-law – Don Mott who died in 2012; his brother – Frank Haluch and his two sisters – Pauline Kopanic and Frances Cieslak.