Myron Morford passed away on February 7, 2016 in Erie, PA. He was born on September 22, 1935 in Wayne, OH, the son of the late Grace Hazlett Morford and Merle Morford. He was preceded in death by his sister, Beatrice Morford Bell, and his wife, Marjorie Taylor Morford. 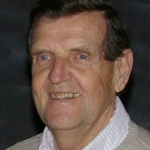 Myron graduated from West Williamsfield High School in 1953 and then served with the United States Marine Corps until 1955. After an honorable discharge from the Marines, Myron began attending Thiel College, studying Chemistry and Mathematics. While a student, Myron met the love of his life, Marjorie Taylor of Brookfield, Ohio. Myron and Marjorie were married January 24, 1958, and together they would spend their years living and teaching in Ohio, Michigan and Pennsylvania.

After retirement, Myron and Marjorie enjoyed living in Edinboro, PA on Edinboro Lake and in Lexington, KY until moving in 2011 to Springhill retirement community in Erie, PA. Myron loved nature, music, travel, reading, biking, and playing tennis and golf with his family. He was active in Kiwanis, the Master Gardener Program and the Master Well Owner Program. Myron loved to share trips, activities and outings of every kind with his wife, children, and grandchildren throughout the years.

The celebration of Myron?s life will be Saturday, February 13 at the Edinboro United Methodist Church with visitation from 3-4, a celebration service at 4:00 p.m. with Rev. Lisa Grant presiding, and dinner following. Final interment will be at the Morford family plot in Kinsman, OH.

The family requests that in lieu of flowers, contributions be made to the Edinboro United Methodist Church or to the Alzheimer?s Association at http://www.alz.org/.