Judy Lou Willey age 71, resident of Crossingville, PA, passed away unexpectedly after a short illness on Friday, February 26, 2016 at Saint Vincent Health Center, Erie, PA.? Born on May 19, 1944 in Crossingville, PA, Judy was a daughter of the late Stephen Shkuratoff and Anna Louise Bogardus Shkuratoff. She married Arden (Buck) C. Willey on November 9, 1974 and he preceded her in death on December 22, 2002. 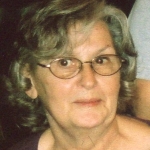 ???? A graduate in the Class 1962 from Cambridge Springs High School, Judy was employed as a machinist at Penn Union in Edinboro until her retirement in 2008. Presently, Judy was a member of Hickernell United Methodist Church and previously had been a member of Carmel Baptist Church. She enjoyed crocheting, knitting, playing cards, fishing and hunting with her husband, and traveling with her daughter.

Friends may call at the Van Matre Family Funeral Home in Cambridge Springs on Wednesday, March 2nd from 2-4 and 6-8. Funeral services will be held there on Thursday morning at 11:00 with Pastor Bob Klingler of Hickernell United Methodist Church officiating. Interment will be in Millers Station Cemetery.