She had resided at the Care Center for the last several years. Born on April 14, 1928 in Kent, Ohio, Donna was a daughter of the late Clifford Chambers and Rose Beerbower Chambers. She married Wilbert John Rutter on July 1, 1946 who died on November 11, 1992. Donna had a second marriage to Tommy Parker Fagg. 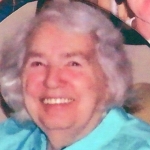 A home maker, Donna was a protestant by faith.

Surviving Donna are two daughters – Carol Ester and her husband, Bernard of Wattsburg and Laura Lynia Merritt and her husband, Roy of Venango; a son – Paul Allen Rutter and his wife, Kathryn of Venango; several grandchildren, great grandchildren, nieces and nephews. She was preceded in death by a son – Thomas John Rutter who died on March 26, 2013; two brothers – Clifford Chambers and William Chambers and a sister – Marjorie Newhouse.

Friends may call at the Van Matre Family Funeral Home in Cambridge Springs on Wednesday, March 16, 2016 from 12 noon until 2 p.m. Funeral services will begin at 2:00 with Pastor Harold Roxberry officiating. Interment will follow at Venango Cemetery.