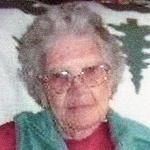 ?? Bertha was married to Raleigh Johnson for 49 years until his death in 1987. Together they raised their children on the family farm, and as a dedicated mother, Bertha taught lifetime values, including the value of hard work, to her family. She was quite talented, evidenced by her knitting, crocheting and quilting, she loved to play the piano and sing, and she was an excellent cook. After Raleigh died, Bertha married Lester Campbell, and the two enjoyed golfing and bowling together until he died in 2008.

In addition to Raleigh Johnson and Lester Campbell, Bertha was preceded in death by a daughter Marjorie Johnson, a son Gordon Johnson, two grandchildren, a brother LaVerne Grandy, and a sister Luella Tarbell.

Visiting hours will take place at Van Matre Funeral Home, 105 Walnut Street, Waterford on Sunday from 4:00 until 8:00 p.m. The funeral service will be there Monday morning at 11:00 a.m. with Pastors Bob Fuller and Julie Kolacz officiating. Burial will follow at Waterford Cemetery.