Lucille M. Gilliland, age 82, of Saegertown, PA, passed away on Thursday, April 21, 2016 at West Penn Hospital in Pittsburgh, PA after an extended illness. Born in Pittsburgh, PA on October 1, 1933, Lucille was a daughter of the late Ward Weaver and Irene Heckman Weaver. She married Clyde L. Gilliland on December 31, 1950 and he preceded her in death on March 17, 2000. 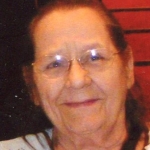 A homemaker, Lucille enjoyed her role in providing a good home with her cooking, baking, and sewing skills. She enjoyed board games, working puzzles, and was known for her sense of humor easily making friends. Many called her “grandmother”.

There is no visitation or services being planned at this time.