Simon “Hap” Holowach, 87? of Cambridge Springs, PA passed away on Friday, April 15, 2016 at Saint Vincent Health Center in Erie. He was born on June 28, 1928 on the family farm, now known as Glacier Valley Farm, in rural Cambridge Springs, PA., a son of the late Simon and Lucille Prokopchak Holowach. 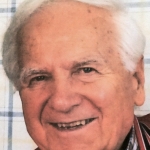 After graduating from Edinboro High School, Hap served in the US Air Force during the Korean War and was stationed in England where he worked as an air traffic controller. Following his military service, he worked for several years as an air traffic controller at the Pittsburgh Airport. Returning to northwest Pennsylvania, Hap operated a laundry mat in Edinboro for several years before deciding on a career in education. He earned a teaching degree from Edinboro State College and taught history for over thirty five years in General McLane High School, Edinboro, PA. For his entire life, Hap lived near, and then on, the farm where he grew up and where he continued to raise beef cattle.

For many years Hap’s voice was widely known to area sports fans as he announced General McLane High School football games and was also the announcer at horse racing events at the Erie County Wattsburg Fair Grounds. Hap was always ready with a joke, and family and friends appreciated his upbeat personality and great sense of humor.

Hap was preceded in death by his parents and several brothers and sisters including – Ann Revak, Stephen Holowach, John Holowach, Frank Holowach, Helen Zemcik, Michael Holowach, George Holowach, Dorothy Smith, and Charles Holowach. He is survived by sisters – Irene Evans of Erie and Pauline McIntyre of Harrisburg; a brother – James Holowach of Tupelo, MS; and by numerous nieces and nephews. He is also survived by good friends – Wynn and Ruth Ann Woods and Nick Sekel.

Family and friends may call at the Van Matre Family Funeral Home, 335 Venango Avenue, Cambridge Springs, PA on Sunday, April 17th from 6:00 to 8:00 and are invited to attend funeral services there on Monday at 2:00 p.m. with burial to follow at Ss. Peter and Paul Orthodox Church Cemetery, 25636 N. Mosierown Road, Edinboro, PA.