Mary Margaret Paver, age 60, resident of West Springfield, died unexpectedly of natural causes on Monday, April 4, 2016 at her home. Born in Philadelphia on January 15, 1956, she was a daughter of the late Walter and Alice Cumberledge Reed. 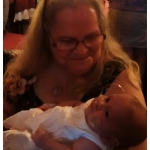 Mary grew up in Harborcreek and lived in West Springfield since 1999. Primarily a homemaker, she enjoyed anything in nature including gardening, hiking and camping, and she was talented at crocheting. Mary wrote poetry and has been published numerous times. She loved her family very much and will be missed by them.

Friends may visit with the family at Van Matre Family Funeral Home in Cambridge Springs on Thursday from 5:00 p.m. until 6:00 p.m. A service will follow at 6:00 p.m.

Memorials will be accepted by the family.