Elizabeth Belle Carr Stine, age 87, passed away at her home in Cambridge Springs, PA on Monday, April 18, 2016. Born in Irvin, PA, Betty was a daughter of the late Thomas B. Carr and Ethel Mae Oviatt Carr. 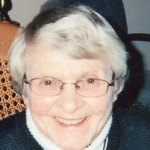 After graduating from Amherst High School, Amherst, Ohio in 1946, Betty moved to Cambridge Springs and began working there at White Engineering Corporation as a secretary. Soon she met her future husband Irving Stine and they were married on September 17, 1949. During the years of 1970 thru 1973, Irving’s employment as plant manager for GTI Corporation in Saegertown took the family to Germany. After their return to the States, in later years, Betty was employed by the Alliance College Bookstore in Cambridge Springs.

As a home maker, Betty excelled in cooking and baking and was especially known for her home made pickles which she generously gave to her many friends throughout the years. Betty and her late husband, Irving, were fun-loving persons and entertained frequently at their home. She was a member of the United Presbyterian Church in Cambridge Springs and was a former member of the Gam-Sac-Mah Women’s Club, the Order of Eastern Star, and the Springs Manor Auxiliary.

Surviving Betty is a son – Thomas C. Stine and a daughter, Judith Stine both living in? Cambridge Springs; a sister – Grace Sandra Bull of Claremont, FL and several nieces and nephews.

Friends may call at the Van Matre Family Funeral Home in Cambridge Springs on Saturday, April 23rd from 2-4 and 6-8. Funeral services will be held at the funeral home on Sunday at 1:00 p.m. with Reverend Tommy O’Leary, pastor of the Cambridge Springs United Presbyterian Church officiating.