Joseph Richard Tucci, age 79, life- long resident of Venango, PA passed away at Crawford County Care Center on Saturday, April 23, 2016. Richard had been in declining health and had been admitted into the Care Center the previous day. Born on October 23, 1936 in Cussewago Township, Crawford County, Richard was a son of the late Joseph Tucci and Josephine Bernoski Tucci. 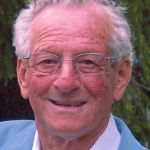 Richard graduated from Cambridge Springs High School in 1954 where he was active playing basketball and baseball.? On November 5, 1955, he married the former Margaret Pauline “Peggy” Moon,? Richard then began a life of hard work. He dairy farmed for most of his life and, beginning in 1961, Richard? began his own business of bull dozing and grading. He became well known throughout the area as a very skilled operator in the preparation of many construction sites and dams. In 1993, Richard, with his family, constructed the Country Meadows Golf Course in Venango which opened the following year which he continued to operate until the present. He enjoyed bowling in various leagues and golfing and also belonged to the Saegertown American Legion Post #205 and Venango VFW Post #169.

Memorials may be made to the Venango Volunteer Fire Department, 21472 Church St., Venango, PA 16440.