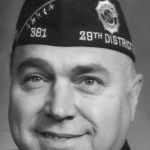 Following his graduation from Cambridge Springs High School in 1961, Paul entered the US Army and served during the Vietnam Conflict as a tank driver. After his discharge Paul was employed at Employment Services in Erie and the State Department of Public Welfare in Meadville, both for several years. In 1982, Paul began employment at the State Correction Institution in Cambridge Springs in human resources retiring from there in 2000.

Paul was a member and very active with veteran’s organizations – Cambridge Springs American Legion Post #381 where he was a Post Commander and Meadville American Legion Post #111 where he held several positions. He also was a Crawford County Commander and a District Commander. Paul was a member of Cornerstone Baptist Church of Crossingville and enjoyed hunting and fishing. He particularly enjoyed his family and many friends.

Surviving Paul in addition to his wife, Carol, is a daughter – Kimberly Pfaff and her husband, Lester, Jr. of Atlantic, PA and a son – Brian Slayton and his wife, Marijo of Crossingville; four grandchildren – Anthony Mulidoro and his wife, Chandra of Saegertown; Nicolaus Multidoro and his fianc?e, Ashton of New Castle; Morgan Pfaff of Atlantic, PA; and Kalee Slayton of Crossingville; three great grandchildren – Hunter, Chase, and Avery Mulidoro. He is also survived by two sisters – Jean Schwab of Saegertown and Darlene Andrews and her husband, Paul of Moscow, PA; a sister-in-law – Pat Slayton of Saegertown and several nieces and nephews. Preceding Paul in death in addition to his parents was a brother – James Slayton.

Paul has donated his body for medical science and the family has chosen not to having visitation or services. The family would like thank Dr. Paul Oyler and his staff and Crawford County Hospice for their wonderful care.

Memorial contributions may be made to Hospice of Crawford County, 448 Pine Street, Meadville, PA 16335 or to Cornerstone Baptist Church in care of Tom Morgan, 19610 State Hwy # 98, Conneautville, PA 16406.