Virginia “Ginger” Marie Ruckman passed away on June 23, 2016 after an extensive stay at the VA Medical Center in Erie, PA. She was born on August 22 in Meadville, PA. 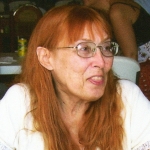 Ginger instructed CCD classes at St. Paul’s and was a member of the Drum and Bugle Corps. She graduated from Academy High School as an honor roll student and then joined the United States Army, later becoming a Disable Veterans Commander. Ginger graduated from Penn State Behrend as a paralegal. She owned and operated All States Specialized Pilot Car Service for over 20 years.

The family would like to thank the Erie VA Medical Center 5th Floor Staff for the care they provided her the last several months.

A celebration of life dinner for Ginger will be held at Stancliff Hose Company in Waterford, 328 High Street, on July 10th at 3:00 p.m. Friends and family are welcome to attend.