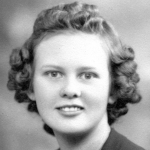 Betty graduated from DuBois High School in 1941 and after her marriage, she and her husband owned and operated Newt?s Sunoco Gas Station in Waterford for over 40 years. She was an active member of Asbury United Methodist Church in Waterford and was a Past Worthy Matron of the Waterford Order of Eastern Star. She particularly enjoyed traveling, visiting many of the States. Her grandchildren meant so much to her and she liked spending time with them.

Preceding Betty in death in addition to her husband and parents, was a son – Gary who died in 1971 and a granddaughter – Amy who died in 1982. Surviving Betty are two daughters – Sandra Gutowski and her husband, James of Cranberry Twp., PA and Linda Newton of Harrisburg; and five grandchildren -Megan Gutowski of Cranberry Twp., Katherine Schoppe and her husband, Stephen of Zelienople, Patricia Newton of Paso Robles, CA; Laura Henninger of Colorado and Beth Rudolph of Delray Beach, FL.

Friends may call at the Van Matre Funeral Home in Waterford on Wednesday, August 3rd from 6 until 8 p.m. A funeral service will be held Thursday afternoon at 1:00 p.m. at Asbury United Methodist Church in Waterford with Reverend Gary Donaldson, pastor, officiating. Interment will be in Waterford Cemetery.