William L. Niebauer, age 72, passed away on Monday, July 25, 2016 at UPMC Hamot in Erie following an extended illness. Born in Meadville, PA on July 23, 1944, William was a son of the late Lorenz and Cynthia Ackerman Niebauer. He married the former Carol Ann Smith on July 3, 1965 and together they resided in Saegertown for the past 51 years. 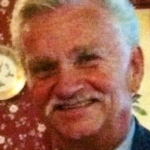 ??????William graduated from Cambridge Springs High School in 1962 where he excelled in baseball, basketball, and football. He, along with his brother known as the “Niebauer Connection”, were inducted into the Cambridge Springs Hall of Fame in August of 2012 for their exceptional athletic skills. After attending Edinboro University, William continued his interest in sports by assisting in various youth athletic programs. For many years he will be remembered for working the football chain at Saegertown.

William was a tool and die maker working in the trade for many years and retiring from Ideal Tool in 2004.? A member of Saint Anthony of Padua Church in Cambridge Springs where he was a faithful long-time usher, William also was a member of Meadville Elks, Saegertown American Legion, Venango VFW, and the Nation Rifleman’s Association. He was an avid hunter, enjoyed playing cards, especially euchre, and loved his family very much.

Friends will be received at the Van Matre Family Funeral Home in Cambridge Springs on Thursday, July 28th from 2-4 and 6-8. A vigil prayer service will be held at 7:45 p.m. A Mass of Christian Burial will be held at Saint Anthony of Padua Catholic Church in Cambridge Springs Friday morning at 10:00 a.m. with Reverend David Poulson, pastor of the Church, officiating. Interment will be in Venango Cemetery.