Teresa G. Latta, age 95, resident of Waterford, died peacefully on Monday evening, September 26, 2016 at Saint Vincent Hospital surrounded by her family. Born on May 10, 1921 in Clerragh Fairymount, Castlerea, County Roscommon, Ireland, she was one of eight children of Michael and Mary Quinn Groarke. 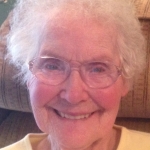 ?? Teresa left Ireland in 1948 to come to the United States. After sailing on the HMS Britannic (which was a sister ship of the RMS Olympic and the RMS Titanic) for eight days, she arrived in New York Harbor – Ellis Island. She earned her U.S. citizenship and moved to Erie, PA where she worked as an assembler at Erie Resistor, and as a clerk at Saint Patrick’s Church.

Teresa met her husband, John Albert Latta, and was married in 1960 and lived in McKean until John’s death in 1991. At that time, she moved to Waterford to live with her son, Harry and his family. She was a loving mother and grandmother who adored her grandsons and cherished the years she spent living with her family.

Teresa was a devout Catholic and very proud of her Irish-Catholic heritage. During the years living in McKean, she was a member of St. Francis Xavier Church, and has been a faithful member of All Saints Parish since moving to Waterford. She enjoyed reading and bird-watching, and will be remembered for her friendly personality.

In addition to her husband John, Teresa was preceded in death by a grandson, Jacob Latta, and two brothers and three sisters, including her twin sister, Eilleen. Survivors include her son, Harry L. Latta Sr. and his wife Tammy of Waterford; two grandsons, Nicholas of Los Angeles, CA and Harry Jr. of Atlanta, GA; a sister Agnes of Manchester, England; a brother Patrick of New Jersey; and numerous cousins, nieces and nephews, living in Ireland, England and Australia.

Friends may call at Van Matre Funeral Home in Waterford on Thursday from 5:00 p.m. until 8:00 p.m. The funeral mass will be at All Saints Catholic Church in Waterford on Friday morning at 11:00 a.m. celebrated by Rev. Gregory Passauer. Burial will be private in Valley Cemetery, McKean.