Frank E. Reichart Sr., age 89, resident of Franklin Township, Edinboro, PA since 1952, passed away on Thursday, September 22, 2016 at Edinboro Manor, Edinboro. He had been in declining health. Born on August 4, 1927 in Parker?s Landing, PA, Frank was a son of the late Burl W.? Reichart and Mabel Pfaff Reichart. 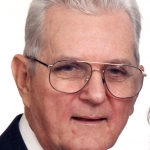 ????? Following his high school education, he joined the US Merchant Marines and served his country from 1943 until 1946. On November 16, 1946, he married the former Julie Dudash and she survives. He first worked for Erie Bolt for a short time and then at Lord Corporation for 39 years, retiring in 1989. In addition to his employment at Lord Corporation, Frank farmed and was a bee keeper. He was an advanced woodworker and made furniture and other fine products.

Surviving Frank in addition to his wife, Julie, are two daughters – Julie Gould of Edinboro and Deborah Testi and her husband, Thomas, of Fairview; two sons – Frank Reichart, Jr. , of Cambridge Springs and Timothy Reichart of Edinboro. Frank is also survived by eleven grandchildren and fifteen great grandchildren. He was preceded in death by a daughter – Linda Reichart who died in 2008.

In lieu of flowers, memorials may be made to Because You? Care or The Second Harvest Food Bank, two of his favorite charities.

Friends may call at the Van Matre Funeral Home in Cambridge Springs in Edinboro? at 306 Erie Street, Edinboro, PA? on Sunday, September 25th from 2:00 until 5:00 p.m. and on Monday from 10:00 a.m. until the time of the funeral services to begin at 11:00. Interment will be in Draketown Cemetery.