Bertha Dorothy Andrews, age 103, resident of 26126 Henry Road, Cambridge Springs, PA for the past 69 years, passed away on Saturday, October 8, 2016 at Country Acres Home, Titusville. Born on February 6, 1913 in Charleroi, PA, Bertha was a daughter of the late Michael Russell and Patricia Daganis Russell. She married John Andrews on November 3, 1934 and he preceded her in death on April 18, 1992. 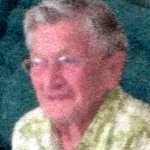 ?In early years, John and Bertha lived in Cambridge Springs where she worked in the hotels and doing housekeeping. They moved to Henry Road, Cambridge Springs in 1947 where they started farming – raising cattle, sending milk, and growing crops. Bertha had a very large garden and enjoyed canning fruit and vegetables. She was a wonderful cook and was still baking pies well into her 90’s. She remained on the farm until she was the age of 100. She then went to live at Country Acres in Titusville.

The family would like to thank the staff at Country Acres Home for the excellent care and provision that was given to their mother during the several years she made her home with them. Memorial gifts may be made to either the Cambridge Springs United Presbyterian Church or Hospice of Crawford County.