Theodore C. Ethridge, age 70, lifelong resident of Mill Village and Waterford, died in an automobile accident on Monday, October 17, 2016. Born in Waterford on July 15, 1946, he was one of four children of the late Cecil A. Ethridge and Gladys M. Eck Ethridge. 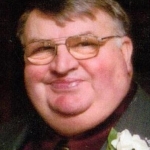 Ted was a well-known business owner with a lifelong interest in agriculture and forestry. After his high school years, he completed forestry school and then drove a milk delivery route for several years for Sterling Milk. The remainder of his years he was self-employed, first co-owning and operating LeBoeuf Plant Foods in Mill Village with his brother, then in 1987, establishing Ted Ethridge Lime Spreading, which he operated until this past April 2016. Over these many years, Ted formed countless relationships around the area.

While being a hard-working man with many interests, Ted believed in taking care of his family, and he especially loved his children and grandchildren and spending time with them. His favorite pastime was checking on the local fields and watching the crops grow. Years ago, Ted obtained a pilot’s license and enjoyed flying his own airplane. He was a longtime member of the Mill Village Methodist Church and was the President of the Mill Village Cemetery Board.

Friends are invited to call at Van Matre Funeral Home in Waterford on Friday from 2-4 and 6-8 p.m. Funeral services will take place at Mill Village Presbyterian Church on Saturday at 11:00 a.m. officiated by Pastor Bryon Switala. Burial and committal service will follow at Mill Village Cemetery.