Ellen Elizabeth Lender, age 88, of McKean, passed away Thursday, October 27, 2016 at Edinboro Manor. Born in Titusville, PA on July 6, 1928, she was one of twelve children of the late William J. and Anna Elizabeth Barrett Slater. She married James W. Lender Sr. in November 1947, and he preceded her in death October 5, 1990. 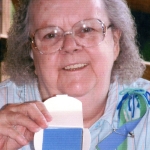 ?? Ellen grew up in Pleasantville, PA, and after getting married, lived in various places before moving to the Erie area, and then to McKean in 1964. She was primarily a homemaker, always busy raising her family and helping her neighbors. She enjoyed fishing, camping, and crocheting, and was a great baseball fan. Ellen was a member of the McKean United Methodist Church and St. Francis Usher’s Club.

Friends may call at Van Matre Family Funeral Home, 306 Erie Street, Edinboro, on Monday evening from 5:00 p.m. until 8:00 p.m. and may attend funeral services there Tuesday morning at 11:00 a.m. with Rev. Tom Shelow officiating. Interment will follow in Venango Cemetery.