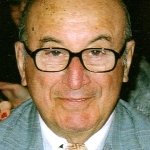 Joe was raised in Erie and after graduating from high school, entered the U.S. Army-Air Force and was stationed in England during World War II. When he returned home, he attended college on the G.I. Bill and graduated from University of Southern California. Joe worked at numerous jobs in Erie over the years including teaching school. He eventually got interested in investments and became an investment broker for Paine Webber for 25 years retiring in 1988.

A man of many interests, Joe especially enjoyed playing golf, going to the beach, and reading. He belonged to the Kahkwa Club and the Erie Maennechor Club.

Joe had three siblings who all preceded him in death–Julia Catalde, Anthony DeMedio, and Celia Ferrara. He is survived by his nephews and nieces– Charles, Bill, Patty, Diane, Joseph, John, Deborah, and Charlotte; and his dear friend and companion, Sandy Harned of Edinboro.

Friends are invited to visiting hours at Van Matre Family Funeral Home in Edinboro on Tuesday from 2:00 p.m. until time of the funeral service at 4:00 p.m. Reverend Ron Sheldon, pastor of Carmel Baptist Church in Mosiertown, will officiate. Entombment will be in Calvary Cemetery.