Richard E. Bukoski, age 92, of Summit Township, passed away Friday, December 9, 2016 at Millcreek Community Hospital. Born in Superior, Wisconsin on July 18, 1924, he was one of seven children of John and Mary Bukoski. He was married to Betty Lou Peters Bukoski who died in 1994. 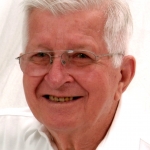 Richard enlisted in the U.S. Navy and served with the Seabees during World War II. He worked for many years as a carpenter and cabinetmaker, leaving his skillful work and solid reputation on countless homes in the Erie area. Also a fine furniture maker, he enjoyed giving finished pieces to family members and friends.

Richard also worked at Erie Malleable, retiring in 1986. After retiring, he continued to enjoy working in his woodshop, and traveling and bowling. He was a member of the Siebenbuerger Club.

In addition to his wife, Betty, he was preceded in death by a daughter, Linda Hartle, and also her husband Bill Hartle; a grandson, Ryan Zalewski; four sisters, Helen, Annabelle, Vanda, and Alice; two brothers, Stanley and Edward; and his longtime friend, Bertha Kerr.

Friends may call at Van Matre Funeral Home in Waterford on Thursday from 4:00 until 7:00 p.m. Funeral services will begin there Friday morning at 9:30 a.m. followed by the Mass of Christian Burial at All Saints Catholic Church in Waterford at 10:00 a.m. Rev. Gregory Passauer of All Saints Parish will officiate. Interment will be in Waterford Cemetery.

The Bukoski family extends sincere thanks to the nurses and staff at LECOM Senior Living Center for their care and compassion.