Patricia Ann Brown Campbell died at Ball Pavilion on Thursday, December 22, 2016 after a short illness. She was born in Corry, PA on October 30, 1931 and was adopted in infancy by Lewis and Doris Beach Brown of Conneaut, OH. After Lewis was killed in a railroad accident, Doris later married Roland Anderson and moved to his home in Albion, 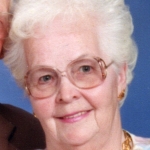 PA, where Pat attended and graduated from high school.

Pat studied to be a nurse at St. Vincent School of Nursing and later finished her RN at Meadville City Hospital. She nursed at Doctor’s Osteopathic Hospital, Millcreek Community Hospital, and lastly at Union City Memorial Hospital. She was a former member of Mill Village United Methodist Church where she served as the pianist/organist for many years.

She was preceded in death by her parents and a brother and sister-in-law, Al and Kay Anderson. She is survived by her husband of 65 years, Harold D. Campbell; a daughter, Connie (Will) Ackerman; a son, James (Carol) Campbell; and a granddaughter, Taylor. Pat is further survived by her sister, Frances (Les) Einhipple; a sister-in-law, Dolores (Donald) Dowler; as well as many nieces and nephews and special cousins.

Friends and relatives may call at Van Matre Funeral Home in Waterford on Monday from 2-4 and 6-8 p.m., and on Tuesday from 10:00 a.m. until time of the funeral service at 11:00 a.m. Pastors James Patterson and Ted Cole will officiate. Burial will follow at Mill Village Cemetery.

Pat’s wishes included memorials to be made to St. Jude Hospital for Children, or to Brevillier Village Nursing Home.