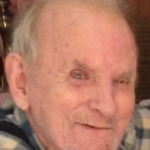 Robert was a proud veteran, serving his country in the US Army during the Korean War from 1951-1954. After his military service, he became self-employed as an auto body mechanic, and also worked as a security guard for Edinboro University, Edinboro, PA, and driving truck for Erie Disposal. In 1972 he became owner/operator of B-J Disposal Service located in Cambridge Springs, PA, retiring in 1982. He enjoyed hunting, fishing, tinkering on any kind of automobile, helping friends and family with any odd job that came along, and spending time with his beloved, June.

Friends may call at the Van Matre Family Funeral Home in Cambridge Springs on Thursday, December 8th from 2-4 to 7-9. Funeral services will be held there on Friday at 11:00 a.m. with Reverend Rod Beardsley, pastor of the First Baptist Church in Cambridge Springs, officiating. Interment will be in Saegertown Cemetery.