Peter ?Pete? Koman, age 89, died peacefully at the Edinboro Manor on Saturday, December 17, 2016. Pete was a lifelong resident of Edinboro. He was preceded in death by his parents and 10 of his 13 siblings. Survivors include his wife of 63 years, Ruth (Martin) Koman; daughters Diane Koman-English of Erie, Julie Koman of Florida, and 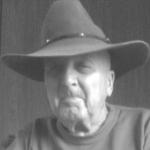 Pete was born on July 5, 1927 to Michael and Anna Hopstock Koman on the family dairy farm on Koman Road in Edinboro that he took over from his father in 1952. In 1994, Pete?s son Dan took over the farm and converted it from dairy to buffalo, under the name of Wooden Nickel Buffalo Farm. Pete was skeptical of this venture at first, but was pleased that his son wanted to carry on the farming tradition. He became one of the Buffalo Farm?s biggest advocates. Pete loved animals and when he retired, switched the cows out for dogs and cats that would gather around him at dinnertime. Pete was happy to oblige with ?a bite for you and a bite for me? philosophy. Pete created a ?haven? for his children, and many nieces and nephews on the farm where they came to work and play under his watchful eye. Stories continue to be retold at family gatherings about those visits and escapades. Pete served in Korea as a field medic and was a life member of the American Legion and a member of the Edinboro-McKean VFW.

Visiting hours will be at the Van Matre Family Funeral Home in Edinboro on Wednesday, December 28th from 2-4 p.m. and 6-8 p.m. with a service following at 8:00 p.m. Interment will be in Saints Peter and Paul Cemetery, Cussewago Township.