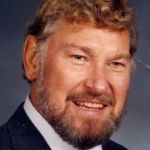 Nick loved hunting arrowheads in fields and participating in archaeological digs around the country and locally. He also loved fly fishing, baseball and football. His high school football team, the Chattanooga Central ?Purple Pounders? of Chattanooga, Tennessee, (when living there through high school), won state champs in 1956 and 1958 and played in the Orange Bowl in Florida. As a high school team this was quite an honor, plus being flown there from Chattanooga was something in those days.

He is survived by his wife Cynthia; his sister Nancy Moore and her husband Dal of Virginia; his daughter, Laura Miller of Florida; his son, Andrew Miller of Wyoming; several grandchildren and great-grandchildren, nieces and nephews.

A private memorial service will be held at a later date.

Memorial donations may be made to the Maplewood Cemetery Association and sent to Cynthia Miller, 15241 Old Wattsburg Rd., Union City, PA 16438.