Charles W. Parker, age 68, of Waterford Township, passed away Wednesday, March 1, 2017 at Cleveland Clinic after a long illness. Born March 17, 1948 in Sharon, PA, he was the son of the late Charles and Iva Knight Parker. He married Nancy E. Danylko on July 26, 1969, and she survives. 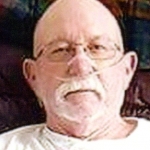 Chuck had been employed for 42 years at Parker-White, then PHB, retiring in 2010. He enjoyed many interests, most of them involving the outdoors– being in the woods on his Massey, cutting wood, making trails, hunting and fishing. He also was skilled at woodworking. Whatever he was doing, most often he would have the companionship of his sidekick, his grandson Justin.

Chuck is leaving quite a legacy with all the people his life touched, for he was a friend to many and everyone felt comfortable around him. He made friends of all ages and could talk to anyone, always passing along kindness, a good work ethic, and morals.

Chuck had a daughter, Natalie Ann Lamp, that died on August 4, 2016, and four sisters that also preceded him in death– Marjorie Fristik, Anna Lindsey, Iva Jane Fish, and Donna Gorby.

Those that survive him include his wife, Nancy E. Parker; son, Craig Parker and his wife Katie of Waterford; daughter, Kari Parker Hanby and her husband Jeff of Meadville; four grandchildren, Brentt and Santanna Lamp, and Justin and Madison Parker; and many nieces and nephews.

Friends and family may attend visiting hours at Van Matre Family Funeral Home, 306 Erie Street, Edinboro, on Monday from 2-4 and 6-8 p.m. The Parker family requests that memorial donations be made to Shriners’ Hospital for Children, 1645 West 8th Street, Erie, PA. There will be a dinner in Chuck’s honor at the Legion Post 285 on West 4th Street in Waterford from 4:00 to 6:00 p.m. on Saturday, March 11th.