Carlton R. Andrews, age 91, resident of 416 Beach Avenue, Cambridge Springs, PA, died on Sunday, April 30, 2017, at Crawford County Care Center, Saegertown. Born on February 20, 1926 in Erie, PA, Carlton was a son of the late Carlton Willard Andrews and Margaret Noxen Andrews. He married the former Marceline Rogean Amy on May 19, 1951 and she survives. 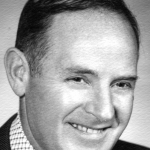 ????? Carlton served with the US Army Air Corps from 1943 until November of 1945. He then began a 43 years career with Penelec. He retired in 1988 as superintendent of maintenance of the Penelec Combustion Turbine site in Cochranton. Carlton enjoyed lawn work maintaining his home and had maintained the lawn at the Cambridge Springs Kingdom Hall of Jehovah’s Witnesses for over 30 years. He served two terms on Cambridge Springs Borough Council and also served several years as Mayor of Cambridge Springs.

In addition to his wife, Marceline, Carlton is survived by his daughter, Carla Andrews of Emporium, PA and a brother, Richard Keith Andrews (Dorothea) of Charles City, Iowa. He was preceded in death by an infant daughter in 1960; by a sister – Harriet Floyd and four brothers – Bill Andrews, Lewis Andrews, Kenneth Andrews, and Frank Andrews.

There are no visitation hours or funeral services being planned at this time. Interment will be held in Venango Cemetery.