Gerald L. Brace, age 80, of Waterford, passed away Thursday, April 20, 2017 at Elmwood Gardens in Erie where he had resided for the past year. Born in Waterford on June 27, 1936, Jerry was a son of the late Charles Thomas Brace and Mary Ann Pasiecznik Brace. He married Shirley A. Yeast on February 14, 1981, and she survives. 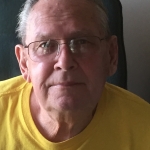 Jerry grew up in Waterford and farmed most of his years, employing many of the local kids who wanted to work hard. From 1981-94, he and his wife operated “Jerry and Shirley’s Pub”, and he also worked at Humes Chrysler Jeep Dodge in Waterford. After retiring in 1998, he continued to keep busy by working at Pittsburgh Cut Flowers in Erie. Jerry mostly enjoyed traveling with his wife and was able to travel extensively over all 50 states and Canada and Mexico. He also enjoyed square dancing and anything involving nature and the outdoors.

He was preceded in death by his sister, Louise Marie Brumagin.

Friends may call at Van Matre Funeral Home in Waterford on Sunday from 1:00 p.m. until time of the funeral service beginning at 4:00 p.m. Burial will follow at Millers Station Cemetery, Crawford County.